skip to main | skip to sidebar

On "The South" and a little bit of Greensboro, NC

One of my primary interests in this project since the beginning has been the opportunity that it presents to explore this notion of "the South" and what that means to the people that live here. Growing up in Fredericksburg, VA, I have always felt like I had my own ideas about what "the South" meant to me, but I never really felt like it was something I was able to or chose to participate in while I was there. It never became part of my identity until I left it and, even then, choosing to leave the South soon became as much, if not more, of a part of my identity than the place itself ever was.

So we've been asking people what they think "the South" is as a place, but, more importantly, as an idea. And in just a few short days we've already gotten a diverse array of really wonderful answers from Southerners, all of whom have embraced the idea as an extremely complex and often elusive idea. I would love to throw up a few audio clips, as we have promised (and still do promise) to do, to let them speak for themselves. We are, however, running into technical difficulties doing it, which is causing a delay, so you'll have to bear with me as I try to do their words justice on here.

Seth Croft, with whom we spoke in Richmond at the Richmond Organization for Sexual Minority Youth (which you can learn more about here), had this to say:

"It means so much about tradition. Many people think of the traditions only in terms of...people go to church every Sunday, stuff like that, or hospitality, things like that. But I think there's a tradition of struggle and liberation."

Seth identifies strongly as a queer Southerner and spoke quite a bit about the complex identities and "shades of gray" the place contains. He warned against the conflation of "the South" and the Confederacy by outsiders but also by Southerners themselves. He hates those Confederate monuments Godfrey mentioned in an earlier post here and went on to say that he believed a more appropriate representation would be monuments to the struggle for justice in the South.

To Richmond and "the South's" credit, however, earlier in the day, Secretary Baskerville showed us this: 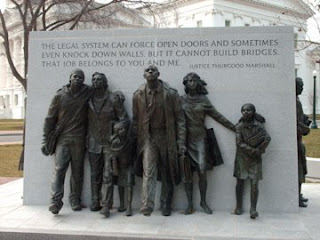 A monument to the Moton High School walkout in Farmville, VA. Here's the other side: 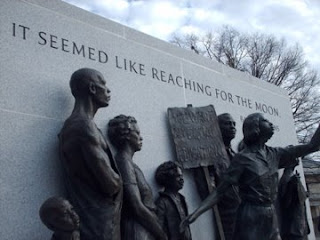 That's Barbara Johns in the center. It's really a very beautiful memorial. I highly recommend anyone passing through Richmond check it out. As monuments go, this may be a big step toward properly honoring that long tradition of struggle and the ongoing progress toward liberation.

Once we hit Greensboro, NC, however, we ran into this: 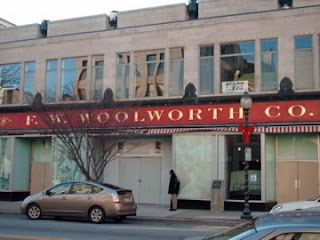 This is the Woolworth's where, on February 1, 1960, four black students from North Carolina A&T sat down and refused to leave until they were served and began the sit-in movement throughout the South in the decade that followed. You can see that it's boarded up. They've been working on turning it into a Civil Rights museum for several years now, but every time it looks like it's about to open, a new problem springs up. We were told by more than one person along the way that it was "bad politics" in Greensboro to push to make this thing happen. Apparently there's still a lot of resistance in the community to having a memorial to one of the pivotal events of the Civil Rights movement. And so the struggle to honor the struggle is clearly far from over.

Brandt
Posted by Godfrey L. Simmons, Jr. and Brandt Adams at 9:42 AM